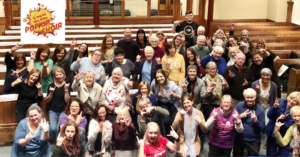 Our first Pop up choir at Pilrig church in Edinburgh

With over 1000 members there will always be someone who wants walk, run or cycle with you.  There are members that don’t do the sporty things and just get together to socialise, have coffee, eat cake or have nights out.

We have built a raft (for want of a better word) and sailed it, we have abseiled from the Forth Road Bridge and put in teams for marathons and taken part in many more sporting events.

Our Sing in the City Dreampot  has raised and donated over £125,000 in the last 9 years and the money has been donated to many charities but now we will also be providing FREE POP UP singing groups in areas where we have a regular choir.  They will be one off singing events with the aim to starting a free choir that people can come along to without having to commit or pay.

We have taken part and performed at so many charity events there are too many to mention but we have tried to make a list on our charity page.

Community is at the heart of everything that we do. #teamsitc #morethanachoir

This video was filmed over 2 busks.  One at Silverknowes just getting them out and about at the Boardwalk Beach cafe and at the Mound in Edinburgh as part of the Missing Millions campaign.  At least 200 members attended both events.

Charities and the Dream Pot

Find out more about the different charities and events we have been involved with, and how we use the Dream Pot to donate to a variety of charities.